If I point out every instance of misogyny on the internet I’ll be here typing away for at least the next thousand years, but this reminded me of something from my past and I just couldn’t let it go.

Further tweets revealed the culprit to be her own son, which excuses it not at all.  Note that he said beating his mother at something didn’t make him feel like an adult, which is gender neutral at least on the surface.  He said it made him feel like a MAN.  And the idea there is that one gets to earn adult male status by defeating women. 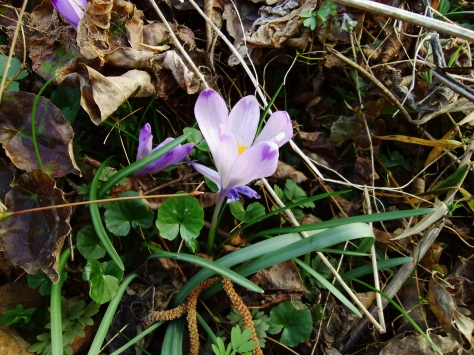 We should all be doing non-competitive stuff like flower gazing

Sit a spell,  dear readers,  and I’ll tell you a story from my past:

About 12 students, including self.

I was the only female in the class.   One other woman was there on the first day, was overwhelmed and quit.

The other students were guys with Russian wives or girlfriends.  Nice, normal, ordinary guys.  Most of them in their middle or late twenties.  There was one fifty year old guy.

They all were better off financially than I was: they had textbooks and I didn’t.  My enrollment costs were paid for by the state, because of poverty, but I got nothing for books.  So I had to get by without them or use the one in the library when it was available (rarely, and you couldn’t check it out).  Old dude even had computer program on his laptop to help his pronunciation, which he gleefully demonstrated to us.   I didn’t have a computer back then.

I’m good at languages, generally.  So I did well in class despite these setbacks.

The atmosphere of the class friendly enough.  Until one day, when the teacher thought it would be fun to have us play a quiz-show style game.

The class was divided us into teams.   She asked each team a question in turn which had to be answered correctly in Russian in order to score a point.  The team members were allowed to confer with one another before answering.

As the game went on it seemed to the teacher that the teams were unevenly weighted as far as language skills went, so she subtracted people from one team and added them to the other.

Mine was the team that was too good, and as this subtraction process went on, it became clear that the reason it was too good was because of ME.

She went on taking my teammates away and adding them to the other team until I was left alone.

Members of the opposing team took turns answering the questions, so each one got a rest afterward.  With 10 students on the same team, that meant that each one spent very little time in the “hot seat”. Also they got to talk among themselves and help each other before giving their answer.

So how did this game finally end?

And after this, (I was younger and more naive at the time) the atmosphere of the class changed.  Suddenly the other students seemed hostile to me.  They would glare, collectively, when I entered the room.   They would intrude on my space in an aggressive way and then back off like they were just joking.   But their body language  informed me that I was a threat and my presence was unwelcome.

Whenever I said something in class, one of them would try to pick on whatever I said in a rude way that wasn’t like the way they behaved before.

The hostility never ceased.  It wasn’t anything you could sue for.  I wasn’t assaulted.  Not physically.  But hitting someone with your fists is just the most obvious way of attacking someone.   This was just as hurtful, if not more, but it was nothing I could prove.  I was just a baby feminist at the time, but I began to realize I was being punished for being an uppity bitch, because I wasn’t willing to sit down and play dumb so that the men could go on feeling superior to me.

I didn’t quit.  I stuck it out.  I finished the course.  I “won”, but the victory was ashes. I didn’t enjoy the class after that and I didn’t take the next course in its sequence because I knew I would see the same people again.     The patriarchy’s job:  done!

If you’re a woman and you challenge a man, whether you win or you lose, you lose.

When men compete against other men, along with the hostility is a certain camaraderie.  The brotherhood appreciates a worthy opponent.  But women are never worthy opponents, so we only get the hostility –  with an extra helping just for us because we’re jumping the rails, doing something we’re conditioned never to do – to challenge men instead of feeding their superiority complex.  Their hostility is meant to punish us for our nerve in acting as if we’re fully human when it’s obvious to them that we’re nothing more than a life support system for lady parts.

Men see smart women as a threat:  Even nice, normal, liberal guys who call themselves feminist and say they love women.  Men will attack any woman who stands up to them.  Because men achieve, and maintain, MAN status by tearing women down. And everyone will look the other way while it happens.  Because our culture is owned and operated by men on behalf of men, not women.