From the moment I stepped off the train I felt overwhelmed by Kiev.  It’s huge, dirty, crowded,  and bewildering.  Annoying touts calling me “dushka” kept pestering me to get in their cabs.  An endless stream of people kept shoving past me and occasionally walking right into me.  There was no time to think,  no quiet space to step back, observe one’s surroundings, and decide what to do.   And there was no air.  The city was burning hot and all the buildings stifling.

And that’s Kiev.  A colossal city, too huge to comprehend.  Crowds that never seem to cease.   Sidewalks that seem designed to torture pedestrians: those that weren’t ripped up or under construction featured mountainous cobblestones and/or walking up and down endless stairways in order to do something as simple as cross the street.   There’s just too much of everything:  too many cars, too many people, too much dirt and noise.  Too many unfortunate young women wearing skirts that barely cover their butts and five-inch heels.  Oh, radical feminism: Ukraine needs you.

Down, down, down to the Kiev metro

The old town in Kiev is lovely, but the entire city of Lviv is lovelier still.  Dneiper river cruises are fun, but cruising in Odessa is better.  Hostel guy in Lviv had said: Lviv was very nice, Odessa was great, but Kiev was a bit disappointing.  You were right, Hostel Guy!

Kiev is also more expensive than Lviv or Odessa.  If I had to rank them in order, I would say prices are cheapest in Lviv, middling in Odessa, relatively expensive in Kiev.   It’s still cheap by Western standards (but not by starving artist standards).  Hostel bed was $16 compared to $10 in Lviv.

Despite all this, I managed to have some fun during my stay in Kiev.  I stayed at Kiev Backpacker’s Hostel, which is beautiful.  Only drawback is one shower/toilet and the building is hot in summer.  Otherwise, very pleasant place with friendly staff.  Achim, the owner, likes to party.  He REALLY likes to party.  Not at the hostel though, but at his favorite hole in the wall bar.

There is a crazy bar called which is themed like a mental hospital and where you can drink vodka out of test tubes and eat steak dinners for a mere $6. 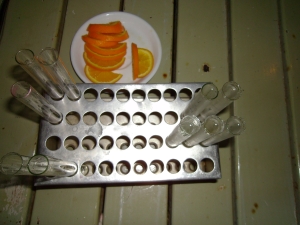 I went there with Achim and some guests from the hostel and we ended up having to drag his drunk ass out of there at 2 AM.   While he was trying to fight with all of us and/or hit on Marian’s mom (she had amazing patience with his foolery).

At least I made a couple of  friends:  Marian, a blonde German who talks in the most hilariously condescending, British-professor way, and his mother. 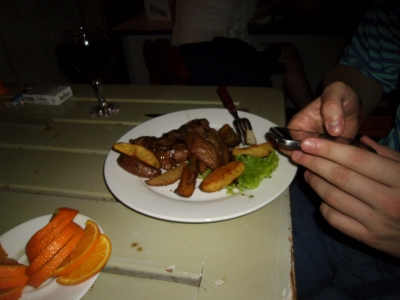 Marian has Ukrainian language skills, so we went together to the train station the next day: he to catch his train to Kharkiv, me to buy a ticket to Odessa.  I wasn’t sure I could afford to extend my trip as far as Odessa, but Lviv Hostel Guy had told me it was wonderful and I shouldn’t miss it, and so far, he has been completely right about everything.

I’m still on the road so these posts are short summaries.  When I get home I will write more in depth about everything.

Took a night train from L’viv to Kiev, or as they call it in Ukrainian now, Kyiv.

I took  train number #92,  rumored to be one of the nicest sleeper trains on this route.  Hostel guy from L’viv said that third-class (platskartny) was perfectly OK, so I decided to try it.  He had to write me a note in order to get the ticket booked – the cashiers have little patience with anyone who doesn’t speak Ukrainian or Russian, so get a native speaker to write down what you want.  An unexpected snag arose when the woman said, “Nimam miesto platskartny” or something that sounded a lot like that.  Luckily Ukrainian is more like Polish than it is like Russian, even though it uses the Cyrillic alphabet.  And it was enough like the South Slavic languages for me to understand that she was saying she didn’t have any places left in platskartny, so I piped up, “Kupeyny!” (second class), and got my ticket.

Interior of my compartment

Second-class compartments have four berths, two upper and two lower.  Be advised, it takes considerable athletic ability to clamber up into the upper berths – more than I’ve got, anyway.  I was assigned an upper berth, but after seeing me struggle to climb up into the thing the nice older man in the lower berth offered to switch seats with me.

The train was new, very clean and nice.  The interior was in soft shades of gray.  The berth itself wasn’t very comfortable to lie on – I find train berths usually not much more comfortable than sleeping on a park bench. Even though they give you little mattress-like pads to lie on,  they don’t help much.

But Ukrainian Railways, surprisingly, has the BEST pillows. They’re full sized, feather/down, and all sorts of soft, squooshy, pillowy goodness.  I loved mine so much I wanted to steal it.

My companions were all male.  Two young students, one who spoke a little English and the other none, and the older man who spoke English fairly well.   They were all very quiet and polite and everyone went to bed within half an hour of the train leaving the station.

The toilets were clean and stayed reasonably so throughout the journey, no worse than an airplane lavatory.

I didn’t really sleep much, but it was about as painless as an overnight train journey could be, and it cost about $20 to cross most of Ukraine, which is huge compared to typical European countries.    It’s the best train for the least money I’ve ever experienced.  Had I managed to snag a third-class berth, it would have cost only $10.