I took night train #105K from Kyiv to Odessa, Ukraine.  It cost 124 Ukrainian gryvna, or about $15 for a second-class sleeper, and it took about 10 hours to reach Odessa.

It was a hot evening in Kiev, even hotter inside the train.  So hot that I had to get out and wait on the platform just to get air.  Our wagon was old and had no windows that opened.

Inside had red-leatherette bunks, fake wood paneling and funny old Russian switches and light fixtures.  Unfortunately I was too hot and tired to take any photos.

It was a four-berth compartment, but I shared it with only one other person:  Vesna, a Ukrainian flight attendant who worked on corporate jets and spoke good English.  My bunk was facing backwards so she kindly switched with me.  We talked about travel and about Odessa, where she lived.  Unlike me, Vesna loved Kiev and said she found something new every time she went there.

The toilet in this old wagon was not nearly as nice as the one in train #92, but it was adequate and not too disgusting, and there was paper.

Once again I didn’t sleep well on the hard bunk, but all the same it didn’t seem long until we reached Odessa.

The first thing I saw when stepping out of the train was this, the Odessa train station: 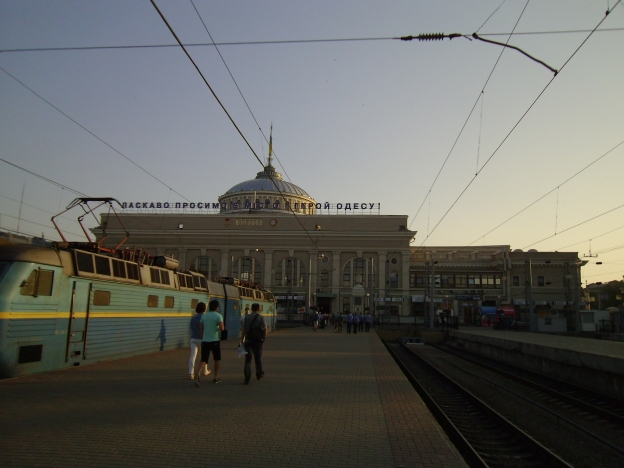 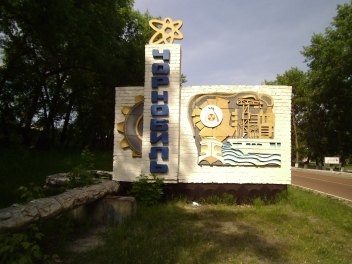 As you know, I went to Chernobyl on my birthday, as part of a tour.

I’ll write more of my personal thoughts about this later, but here is some basic information for anyone who is interested in taking a similar tour:

There are different companies (I used this one) but the tours themselves are pretty similar.

The tour must be booked at least 11 days in advance, because the rules are stricter now and permission to visit must be applied for this early.  So you can’t just show up in Kiev and expect to go to Chernobyl on the spur of the moment.

The tour costs about $150-400 depending on how many people go.  My group had five people.  I paid $169.  I paid two small deposits beforehand, and the rest on the day of the tour in cash.

The tour takes about 8 hours.  It takes 2 hours each way to drive to the exclusion zone and back to Kiev.

In the summer it is very, very hot.  Still, you need to wear closed shoes (hiking shoes are best), long pants, and bring a long-sleeved shirt.  Wear sunscreen. And bring bug spray!  I forgot it, but luckily someone in my tour group let me use hers.  The bugs are incredibly diverse and numerous and many of them bite.   Biggest mosquitoes I have ever seen.  Maybe they’re mutants.

I brought my sun hat, and was I ever glad I did.  The sun is brutal and you’ll be walking around outside during the hottest part of the day.

Don’t worry about bringing water, snacks, et cetera, as the van will stop at a gas station along the way where you can get anything you need.  Also, the one we stopped at had the best toilet paper I ever found in the Ukraine.  True fact.

You won’t meet your tour guide until you actually get to the exclusion zone.  That’s because the guides actually live in the city of Chernobyl in a special hostel.

The hole that got me.

After the guide is picked up, she will bring you to some houses outside of Chernobyl, one of which used to be a House of Culture or something… step very carefully, because the floor is rotten.  If you see a big hole near the door on the right, that’s the hole I made falling through!

Then you’ll go on to the city of Chernobyl, where the guide will show you where the guides live, and some photos of the exclusion zone, and talk a bit about what happened.  (Our talk was a bit on the garbled side actually, but pretty much everybody knows what happened in Chernobyl).

You might not know that people still live and work in Chernobyl: the workers who are building the new sarcophagus for reactor #4 and the tour guides, as well as a few stores, pubs and restaurants.

Then you’ll drive to Pripyat, a town that was built in 1970 for the workers at Chernobyl and abandoned after the accident.  This is the longest and most interesting part of the tour by far.  On the way, you’ll pass the power plant and see reactor #4, but you won’t be allowed to take photos, yet.

Then the bus will drive along a heavily forested road and stop in a heavily wooded area, and you’ll get out and be amazed that this forest is actually a town.  Or used to be one. 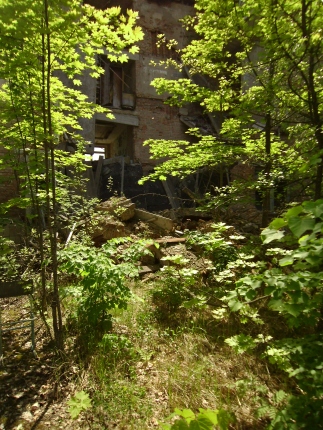 There’s a town in there somewhere

Visitors aren’t actually allowed inside the buildings any more.  At least not officially.  Unofficially, you’ll be able to go into some of the less important buildings and take pictures. There are so many interesting places in Pripyat I can’t list them all, but the main square of the town, the school, and the playground are the highlights.  You’ll also stop outside of town and take pictures of the Pripyat sign.

After this, you’ll go to a place where you can take photos of reactor #4.  Possibly the most boring part of the tour, because you can’t go anywhere near the reactor and you’re only allowed to point your camera in one direction or you get in trouble (seriously).

After this is lunch:

You will eat at the Chernobyl worker’s cafeteria and you will pity these people for having to eat food like this.  Hopefully you will have bought extra snacks at the gas station earlier.

After lunch, you’ll go to feed the giant radioactive catfish that lives in the cooling pond of reactor #4, visit some monuments, and as a last hurrah, tour a really creepy abandoned orphanage.

The last place you’ll go is to the Chernobyl sign where you can take more photos.

Then you’ll go through a radiation detector (again), the tour guide will leave, and you’ll be driven back to Kiev.