Somebody tweeted this onto my timeline:

“Naked Bird:
Kind hearts, I ask you to attend a fine performance engineered by Phil Ryan and John Bird (creators of The Big Issue) that has a unique and interesting theme. That theme is ‘Redemption!’
Ryan and Bird tell Bird’s story through interrogation and drawing of how he moved through poverty and crime into purpose, by adopting art as his main passion. He drew a lot of naked women in order to bring this journey to a useful and creative solution.
Without drawing naked women, they conjecture, without art being central to Bird’s life, there would not have been the progress that led him to become one of the most important socials (sic) engineers of the last 20 years.
Bird will be interrogated by Ryan in the first half of the piece. In the second part Bird will draw a model as she cross-questions him about his art and his struggle to make sense of his broken life.”

Hey, everybody! Come see our show! Hot naked chick for your dudely gaze!

If nakedness is so important to the noble goal of redeeming Mr. Bird from his life of poverty and crime, why doesn’t he paint naked pictures of himself?

But wait!  The model isn’t just getting naked for the vicarious enjoyment of the audience;  she gets to participate!  She gets to ask the mighty art-dude questions, creating an illusion that she somehow has some kind of control over some part of this ‘performance’. She still has to strip naked in front of everybody, though, and he doesn’t.

Clothes represent status, and depriving a woman of them for entertainment purposes is an act of humiliation and a reinforcement of male supremacy. 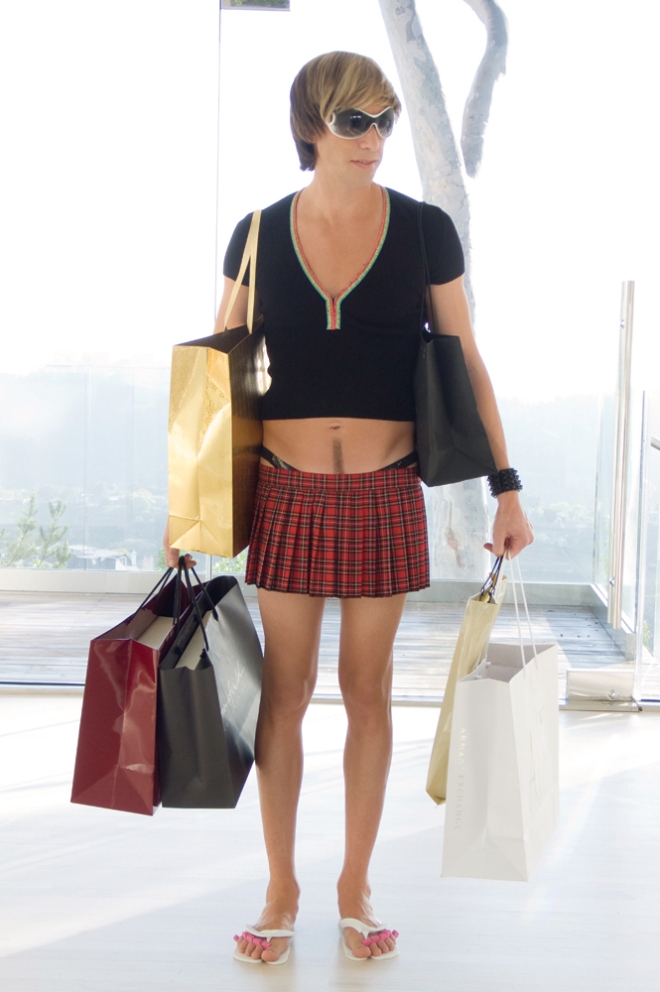 When we see a dude revealing as much skin as a woman is expected to reveal on an everyday basis, we laugh because it looks so absurd.   We don’t laugh when a woman does it.   What makes a thing funny is the juxtaposition of things out of place; women displaying submission by showing their skin has been drummed into us as normal by our culture for so long that it doesn’t even strike us as unusual, much less laughable.

If women were considered fully human beings, the ridiculous things they are expected to do and wear as part of performing femininity would look absurd to each and every one of us.

If women were considered fully human beings, the idea of having one strip and show all of her skin to some artdude so she can have her humiliation captured for all time in a work of  ‘art’ would horrify us.

What’s most revolting about all of this is the way art-dude frames his exploitation as vital in saving himself from a life on the bottom rung of society.  Right.  He’s climbing out of poverty right over the backs of women who are likely to be even poorer and more vulnerable than he is.  He’s acting like pushing women down into the muck is something noble.

I’ll bet we’ll never see Bird exploiting his own nudity for cash.   Like any other pimp or pornographer, he wouldn’t dream of treating himself the way that he treats women.

Things like this are so common in a male-dominated art world that the temptation to say ‘Fuck art‘ is strong.  But I stubbornly continue to believe that art that doesn’t oppress women can and should be made.   But it won’t be made by privileged art-dudes who see nothing wrong with reducing women to the status of objects.

8 thoughts on “Desperate Art-Dudes can only save themselves by exploiting women!”