A cracking new post about Clyfford Still over at Abstract Critical:

“We should not be surprised then, that many of the best Stills can feel closed in, have dark and earthen tones, and are marked by that ubiquitous “lifeline,” and yet suggest a transcending power and vitality…”

This is number 17 in the series. You can read the other posts here.

For this painting, I’d build a wall.

I am still in the process of researching this, but I will talk more about this painting and symbolism of birds in Clyfford’s work in future posts.

When I first saw CSM- 4619 I was immediately reminded of the song in the video clip below.  (Read the Youtube comments; they’re surprisingly eloquent.)

This is number 15 in the series. You can read the other posts here.

This week we go back to the early days of Clyfford Still, before his paintings progressed into complete abstraction. 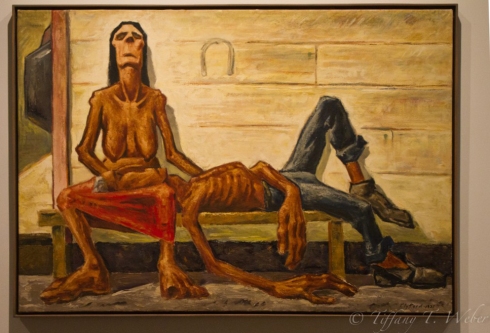 A woman old before her time, a death’s head surfacing beneath her skin.  A gaunt male figure is cradled on her lap, almost in a nursing position, but he seems too weary to take any nourishment and she is too empty to provide it. These starveling figures are eerily prophetic in the light of the concentration-camp images that would shock the world only ten years after this picture was painted.

Artists learn how to do art by reproducing what they see around them in a realistic manner.  Once the techniques are mastered, many artists go on to use the techniques that they learned to interpret reality more imaginatively.  Clyfford Still began on this path trod by so many others, but his originality soon surfaced, and drove him to be one of the first artists who abandoned reality altogether and plunged into complete abstraction.   But what drove that process?

END_OF_DOCUMENT_TOKEN_TO_BE_REPLACED

This is number 14  in the series.  You can read the other posts here.

This week we’re looking at the lighter side of Clyfford Still.  We don’t have any evidence that Clyffie himself actually possessed a lighter side,  but a survey of popular culture reveals that one exists – created by other artists with a bit more humor and less paranoia.

END_OF_DOCUMENT_TOKEN_TO_BE_REPLACED

This is number 13  in the series.  You can read the other posts here.

This week we are looking at two views of 1950-A No.2 – one in a gallery setting and the other an extreme closeup.  Close-up shots are great.  You really learn a lot about an artist by the brush or knife marks on the canvas.

1950-A No.2 by Clyfford Still (center) alongside a Rothko. Photo: C-Monster

A lone black spot in the heart of the sun.

Detail from Clyfford Still’s 1950-A No. 2 by AlbinoFlea

While we’re on the topic of divergent views:

If you are interested in Clyfford Still’s early life, there are two posts on the Still museum’s blog about his mother and father, including this sketch done when Clyfford was only 26.

Bailey Harburg describes Still’s early life with his father.  It’s pretty clear to me that there was child abuse going on, which is why I’m a little disturbed by these words: “However, Elmer’s unsympathetic attitude ultimately paved the way for Clyfford to brazenly navigate a similarly harsh art world.”

This sounds to me almost like a justification of child abuse, which I am sure Harburg did not intend.  But just because Still was able to make his way in the art world (at least for a while, until he rejected it) does not mean that he somehow transcended his abuse, or even worse, that abuse somehow inspires people to overcome.  Because this is a backhanded justification for abuse that even abusers use.  Toughen up!  It’ll make you a man!  Et cetera.  In response to the old cliche, “whatever doesn’t kill you makes you stronger,”  the comedian Dennis Miller once remarked: “Whatever doesn’t kill you messes you up for a really long time, and you’re lucky if you ever get it together.”

I would disagree that the abuse Clyfford suffered held for him any kind of benefit.  The damage done to his developing sense of self would later manifest in paranoia and a need control that sabotaged many of his relationships. The unyielding and uncompromising force of his personality kept him from being crushed by his past, but he and the people around him still paid a heavy price.

Still’s closest and most enduring relationships were with his wife and daughters – all women.  He saw men as a threat, and that undoubtedly was caused by his troubled relationship with his father.  He never had a son, but it is interesting to imagine what might have happened if he had.  I suspect it would not have gone so well.

Still was a complex and deeply sensitive man who internalized some of the abuse he suffered as a child and turned it on some of his closest friends.  It’s not necessary to justify this, or to smooth over his early life, to make him more sympathetic.   Part of what makes Still so interesting is that he is often unsympathetic.

Questions? Comments?  Talk to me in the box below, or tweet with the hashtag #clyffordlove.

This is number 12  in the series.  You can read the other posts here.

CNN published a story about Clyfford Still today.  It covered the basics but I thought depended very heavily on Dean Sobel’s opinions, some of which sound rather familiar.

The most influential artist you’ve probably never heard of

Denver (CNN) — Clyfford Still was one of the most influential artists of the 20th century, but it’s likely you’ve never heard of him. That may be starting to change though. More than a half-century after walking away from fame and fortune, the late painter is gaining renewed appreciation, with his work finding a permanent home at a Denver museum.

How the Clyfford Still Museum came to exist is nearly as compelling as the paintings on its walls. Still agreed to give away all his art in his possession to an American city that agreed to keep the entire collection intact after his death. He died in 1980.

Still is credited with being a pioneer of the abstract impressionist movement in the early 20th century. Yet the breadth of his artistic reach remains a mystery.

Click here to read the rest of the article at CNN.

Thanks @belovedbelove for the link.

In this early Still we see the vertical lines that Still loved to use.  Remember that even his handwriting had this very long, vertical look to it.  It’s the signature of an ascetic: a person who turns away from the flesh in order to embrace the ideal.  The colors are still relatively drab during this period.    I think I see some decaying surrealism in there, with a bit of modernism in the shape of the yellow blocks – but there’s something about Still that’s too defiantly organic to be really modernist.

And it really does look like an abstract bunch of penguins.

In case you haven’t been following along and are wondering why I have mixed feelings about the Clyfford Still Museum, it is because I have tried repeatedly, and politely, to get some cooperation out of them in finding material about Still for this blog – only to be ignored.   The museum staff is too busy to answer public inquiries – at least too busy to answer mine.  Maybe because they’re too busy using the museum’s Twitter account to tweet fawning praise for local politicians or talk about their jazz record collection or what book they read instead of talking about anything that has something to do with the museum.   Possibly they might view me as some kind of competition, but that’s ludicrous.   I’m not selling anything here.

Then again, experts like to belittle the public opinion and consider it uneducated,  so perhaps that explains why they’ve been unwilling to help.  Maybe they’d be quicker to respond to their mail if my name had a MFA after it.

It’s more than a little ironic, but perhaps unavoidable, that Clyffie’s legacy is being looked after by the very kind of art snobs that he couldn’t stand in life.  It only underscores the need for public participation in the art world, even when (ESPECIALLY when) the art snobs try to lord it over ordinary folk.

I say this to every person I meet who seems intimidated by the art world:  “Your opinion is just as good as theirs.”   Because it is.

There’s the reply box, waiting just for you.  Or tweet them to me with the hashtag #clyffordlove .

This is number 11  in the series.  You can read the other posts here.

Illusions, in one form or another, have been the recurring theme of the blog this week, so it’s only fitting to end it with some words about finding truth.

I hold it imperative to evolve an instrument of thought which will aid in cutting through all cultural opiates, past and present, so that a direct, immediate, and truly free vision can be achieved. (Clyfford Still)

END_OF_DOCUMENT_TOKEN_TO_BE_REPLACED

This is number 10  in the series.  You can read the other posts here.

Jagged orange stalagmites are submerged in a blue haze that turns them violet, as if we have stepped into a cave in the gloaming, or are underwater.

The best works are often those with the fewest and simplest elements… until you look at them a little more, and things start to happen.  — Clyfford Still

END_OF_DOCUMENT_TOKEN_TO_BE_REPLACED

This is number 8  in the series.  You can read the other posts here.

A howling grey wind in a night that has swallowed all color.  We’re just fragments of  red, yellow, blue and white,  engulfed in infinite darkness.

“I will always represent a one-man war against the abdication of individual will [institutions]  usually demand, and the confusion of purpose they introduce, since power is basic to their survival… We can never meet except in a state of armed truce.”

END_OF_DOCUMENT_TOKEN_TO_BE_REPLACED

This is number 7  in the series.  You can read the other posts here.

Today’s painting is PH1033, dating from 1976.    Bolts of jagged orange blaze their way through a cold white background like lava burning through an ice sheet.  A dab of brown on the left, which seems to float in arctic calm despite the orange bursting like a solar flare next to it, balances the monumental violence on the right.

“You can turn the lights out. The paintings will carry their own fire. ”  — Clyfford Still 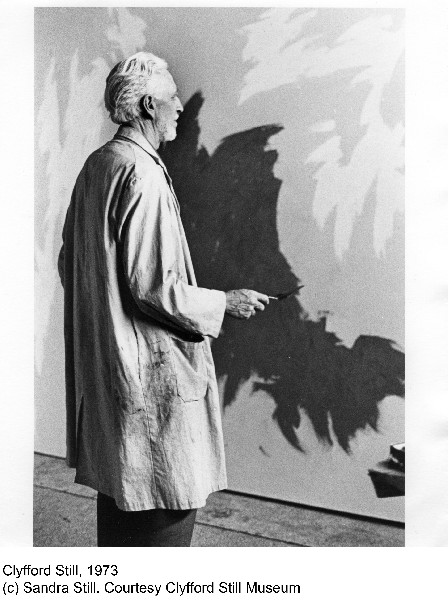 Here we have Clyffie’s palette and painting knives.  He painted with knives rather than brushes.  And he didn’t clean them any better than I do mine.   The last painting he ever painted was mostly yellow, it looks like.  (Want to see more palettes of famous artists?  Click here.)

Questions or comments?  You are warmly invited to leave a comment below, or tweet to me with the hashtag #clyffordlove.