I went to Brezice yesterday to buy a chair.  Unfortunately the chair I wanted was no longer on sale, so I bought another one which was a bit inferior in quality but was a garden chair so I could put it out on the balcony.

I also got to wander around Brezice in the hot sun and eat kebabs.  Brezice is much less depressing than Krsko, because it is a spa town and has a lot of pretty architecture.  None of which can be seen in the photo below:

I’ve always loved sycamores.  Those dangly things (I am sure they have a name, I just don’t know what it is) seem to be left over from last year.  The building in back is a housing project, of which Brezice has many, but they’re also not as depressing as the ones in Krsko.  Brezice also has spectacular sunsets in summer, which we can’t see here because of hills in the way.  So spectacular I want to go there and paint them.  Only getting home would be a problem, because the last train home leaves before the sun is fully down.

If I stop posting due to mortification I may end up giving up the blog forever, which I can’t really do because I’ve committed myself to Sundays with Clyfford Still.  If I quit now Clyff’s genius may go unrecognized and that would be even more mortifying.

But my writing wheels are still jammed up with humiliation and distress, so I have little text to entertain you with.  Instead, here’s something pretty and not embarrassing at all to look at:  a tree from a graveyard in Krsko, which I passed yesterday.

I took this back in October, but I’m putting it up because it has no snow in it.  I am sick of snow, thankyouverymuch. 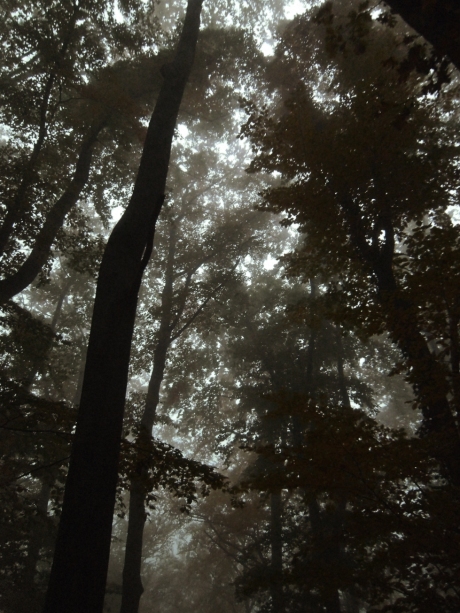 The woods are lovely, dark and deep

The company of trees often seems more congenial than that of humans.  Possibly because trees aren’t very judgmental,  few of them follow fashion trends, and none of them watch sports.

Trees near my house

I went out with my camera again this afternoon and took some pictures near my house.  This is one of the few that weren’t blurry.

I come back home to find my landlord, along with half the neighbors, chopping up pig parts in the basement.  They all look at me.  I freeze for a second as the language barrier kicks in, then I remember to say “Dan“, which they answer equally shyly.  I give my landlord the rent and he takes it in his big hard palm, stained with  pig-part grease, and says  “Thank you,” in English.